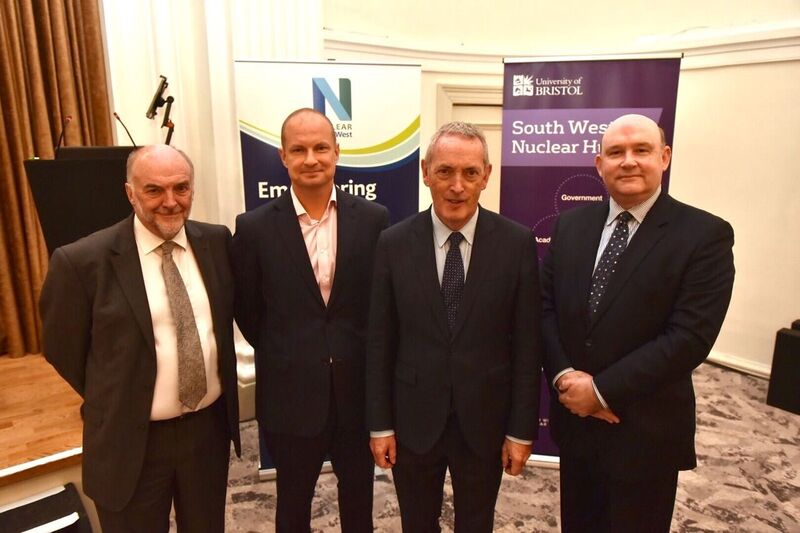 The success of the South West’s nuclear industry can play a pivotal role in sustaining the government’s growth ambitions, according to Lord Hutton, chair of the Nuclear Industry Association.

He told delegates that the major construction activity taking place at Hinkley Point C new nuclear Power Station in Somerset will be followed by further new build projects elsewhere in the UK, unlocking billions in new investment and creating more than 12,000 jobs.

“Hinkley is the start of an exciting new era for the nuclear industry and will be followed by further projects across the country.

“These will inevitably provide major opportunities for UK industry, particularly for companies that get in early. Nuclear South West can play an important role in helping them to do this, and therefore in supporting growth and jobs right across the South West.”

Speaking of progress at Hinkley Point C, the conference heard that the construction project employed 3,200 people on site and had awarded projects worth £1.3bn in the South West alone, supporting industry, local jobs and skills.

Lord Hutton also spoke of the importance of the £200m Nuclear Sector Deal agreed with government, which paves the way for major new investment and further job creation.

“The publication of the sector deal has been an important step for our industry and one for which we have worked intensively with government over many months,” said Lord Hutton.

“But publication is not the final act. What we need to do now is to effectively implement the deal so the ambitious proposals it contains can be brought to fruition. This will require a great deal of work across all the key areas.”

Other speakers at the event included South West-based company SC Innovation, who have successfully grown their business by working in the nuclear industry. The company has recently completed tests on water filtration and cooling systems which will be used at Hinkley Point C nuclear power station and provided engineering advisory support for the construction of the jetty which is under construction at the site.

SC Innovation were supported by the Hinkley Supply Chain Programme team, which works with contractors to connect local companies with the opportunities linked to the new power station.

“Focusing on nuclear has given us great exposure to new work in the South West, as well as new markets in Scotland, the North West and overseas.

“When the nuclear island starts being built at Hinkley Point C we will see an influx of highly skilled people coming to work in the region.

“The big drive is to bring people down here and show them that the South West has so much to offer professionally, as well as an excellent lifestyle.”

Also speaking at the conference, David Ralph, Chief Executive of the Heart of the South West Local Enterprise Partnership said:

“With £50bn worth of commercial opportunities in the nuclear industry, it’s the south west’s prime sector through which our partnerships in the private and public arena can generate growth and raise productivity for the whole of the region.

“The partnership is working on its Local Industrial Strategy to build the bedrock of skills, innovation, infrastructure, business support and enterprise zones that will enable us to unlock the nuclear opportunities and create an economic transformation that will help to raise revenue for the UK as a whole.”

“The industry has many reasons to be confident and optimistic about its future, thanks to the work taking place to sustain its growth.

“The South West’s nuclear cluster has the capacity and the capability to service all the industry’s needs. It has an unparalleled body of expertise and track record of delivery across all aspects new build, decommissioning and defence activity.

“It’s also a highly desirable destination for businesses and staff because of its combination of opportunity for growth, access to talent, professional development opportunities and quality of life.

“We look forward to continuing to work with partners in the South West and nationally to support it is success.”

A report commissioned by Nuclear South West recently revealed that the region is ideally placed to capitalise on economic opportunities worth £50bn to the UK economy. The research states that South West-based SMEs, large companies and training providers could supply £15bn worth of work to the nuclear sector.

For more information, to request an interview or attend the event, please contact Ben Lowndes at Social Communications on 07387 140 782 or benl@social-communications.co.uk.

Further photos of speakers and activity can be found here https://bit.ly/2NqCWME. Please credit EDF Energy for any images relating to Hinkley Point C or apprenticeships

Nuclear South West is a partnership of industry, academic and public sector, set up to champion the South West nuclear industry as the premier destination for investment, innovation and growth.

It is established and supported by the Heart of the South West, West of England and GFirst LEPs, with involvement from public sector and strategic organisations.

Research has shown that there are £50bn worth of opportunities in the nuclear industry within 75 miles of the South West region. The region has the expertise, ambition and vision – as well as a critical mass of thriving businesses – to act as a catalyst to drive economic productivity within the nuclear sector.

Hinkley Point C, the first new nuclear power station in the UK for a generation, will create 25,000 job opportunities, 1,000 apprenticeships and will pump £100m/year in to the regional economy. The South West is also home to the Oldbury nuclear reactors in Gloucestershire, the South West Nuclear Research Hub – a partnership between Bristol and Oxford Universities, the National College for Nuclear, the Somerset Energy Innovation Centre and the Berkeley Green University Technical College.

More information can be found at www.nuclearsouthwest.co.uk