Partners mark progress on A382 improvements 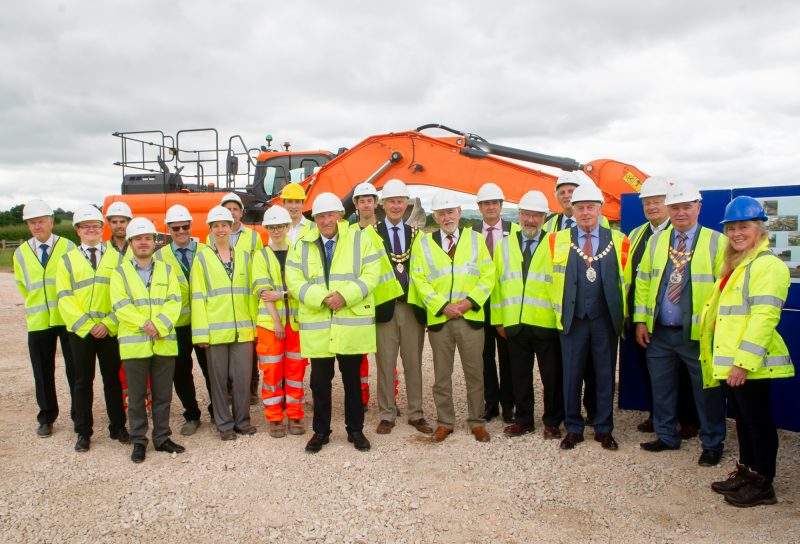 A ceremony has been held to mark progress on vital infrastructure to support economic growth on the outskirts of Newton Abbot.

The scheme, which will unlock the development of employment land and 2,500 homes, is being funded by the Department for Transport, Devon County Council, the Heart of the South West Local Enterprise Partnership (HotSWLEP) and Teignbridge District Council. The partners gathered to celebrate recent progress on the project.

Devon County Council Chairman Councillor Jeff Trail BEM carried out a ribbon cutting to mark the completion of the first phase of improvements to the A382, which opened last month.

Teignbridge District Council Chairman Councillor Colin Parker also undertook a turf cutting at the Houghton Barton Link Road which is currently being developed to provide a new connection between the A382 and the A383.

The event was also an opportunity to celebrate the recent provisional award of £38 million in Government funding to complete the remaining phases of the A382 corridor improvement scheme.

Karl Tucker, Chair of the Heart of the South West LEP, said: “I’m delighted that this innovative development in Newton Abbot has reached another milestone today. This project is an important step forward in ensuring we have the infrastructure to support our communities and our businesses, and our £6.5 million Local Growth Deal investment will play a vital role in the economy’s recovery.”

Councillor Andrea Davis, Devon County Council Cabinet Member for Climate Change, Environment and Transport, said: ““These schemes have been in development for many, many years, and today we are a major step closer to the plans being realised. Funding has been provisionally approved by the DfT towards completion of the A382 improvements, subject to final approval of the Business Case. These new developments will provide extra capacity to accommodate growth, while improving safety and journey reliability. New high-quality pedestrian and cycle paths will also support active travel.”

Teignbridge District Council Chairman Councillor Colin Parker said: “Both authorities have worked together tirelessly to bring forward this important package of transport improvements from the A38 into Newton Abbot’s bustling town centre. Projects such as this demonstrate that Newton Abbot is open for business. Coupled with our ambitious town centre regeneration programme, they represent a real shot in the arm for the local economy just when it’s needed.”

Councillor Phil Bullivant, County Councillor for Newton Abbot North said: “The delivery of the new link road will be a huge benefit to the residents of the new developments in Hele Park and relieve the high traffic volumes currently using Highweek Village to access the A38. This investment is very welcome as it also delivers the required enhancement to the main route from the A38 into Newton Abbot which will encourage the growth of businesses and job opportunities in our area.”

The 160-hectare site to the west of Newton Abbot has been allocated for residential and employment development as part of the adopted Teignbridge Local Plan.

The first phase of the Houghton Barton Link Road connecting the A382 and A383, is being delivered by Devon County Council, Teignbridge District Council and the HotSWLEP. It will eventually provide an alternative route between the two roads to relieve pressure on the local highway network including the road through the area of Highweek. The second phase of the link will be delivered by developers at a later date.

The next phase of improvements will include completion of the long-awaited Jetty Marsh 2 link road, connecting West Golds Way by the Hospital to the recently finished phase one A382 scheme, providing an alternative route into Newton Abbot.

The recent widening and realignment scheme will also be extended through Forches Cross with a new roundabout, and onwards to Trago roundabout, with a new dual carriageway connecting from there to Drumbridges.

Pedestrian and cycle paths will also be completed to connect Newton Abbot to Drumbridges, with a new bridge across the A382 at Forches Cross, and improvements on Exeter Road.