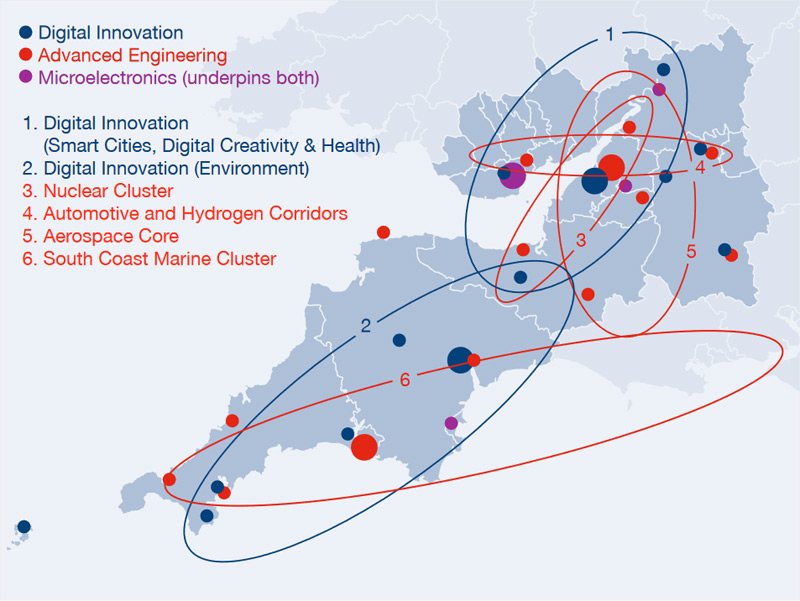 A consortium of major businesses, Local Enterprise Partnerships and higher education institutions found that the South West England and South East Wales region can lead the UK and compete with the world in the areas of advanced engineering and digital innovation.

The consortium welcomes the government’s announcement this week to establish an Industrial Strategy Challenge Fund to support collaborations between business and the UK’s science base.

Yesterday’s Autumn Statement confirmed an additional £4.7 billion by 2020-21 in R&D funding help boost UK productivity, and the consortium is ready to use the findings of this audit to launch effective initiatives to take up these new opportunities.

The Government invited the SWW-IA audit, which was led by 6 universities working with key organisations, including Airbus, the Met Office, Rolls Royce and Johnson Matthey, and Local Enterprise Partnerships across the region.

It identified that South West England and South East Wales is home to the largest aerospace sector in the UK and pioneering automotive, nuclear, marine and marine renewables and microelectronics industries.

The region also has strengths in digital innovation: it’s home to the largest silicon design cluster outside of the USA; there’s more climate expertise here than any other area worldwide; it’s a global powerhouse for microelectronics industry; and a national exemplar for smart cities.

Opportunities to raise Productivity include integrating the scientific and industrial strengths of the region, such as investment in the Compound Semiconductor Applications Catapult, the proposed Institute for Advanced Automotive Propulsion Systems, and a National Composites Materials Centre.

The SWW SIA process has provided real impetus for cohesive working across the region, which offers great benefits to be realised by investment by Government in partnership with the private sector.

The government has thanked the consortium for the audit and its findings have been incorporated into Autumn Statement and proposals for the new Industrial Strategy to raise Productivity through science, research and innovation.

Steve Hindley, Chair of the Heart of the South West Local Enterprise Partnership, said: “We at the LEP have long been aware of area’s significant strengths in these sectors, which our forthcoming Devolution plan underpins.

“The findings of the audit are immensely encouraging but do remind us of the missing links that need to be put into place by investment in order for us to fulfil the enormous potential that’s been recognised here. Therefore HotSW LEP welcomes the proposal for a nationwide Industrial Strategy to enable this area to harness the opportunities and address the gaps in funding and infrastructure that the audit highlighted.”

Prof Judith Petts, HotSW LEP Board Member and Vice Chancellor of the University of Plymouth y, which was part of the consortium, said: “The audit shows that the South West has world-leading capabilities to make a real impact on productivity across a variety of sectors. It highlighted strengths such as big data, sensors, cyber-security and autonomous systems, which means we can really hone in on our specialisms to help the country achieve growth.

“With the new Industrial Strategy Challenge Fund announced this week, we can look forward to building on these strengths and by sharing expertise and collaborating across the South West economy.”

The full report and summary document are available through these links.

The South West England and South East Wales Science and Innovation Audit (SWW–SIA) has been undertaken by a consortium that brings together key organisations and businesses from South West England (Cornwall and Isles of Scilly, Gloucestershire, Heart of the South West, Swindon and Wiltshire, and West of England LEPs) and South East Wales. The SWW region has a population of 6.2m people and has 14 research institutions, 15 Higher Education Institutions, 27 Further Education Colleges, and over 35 science parks and innovation centres.