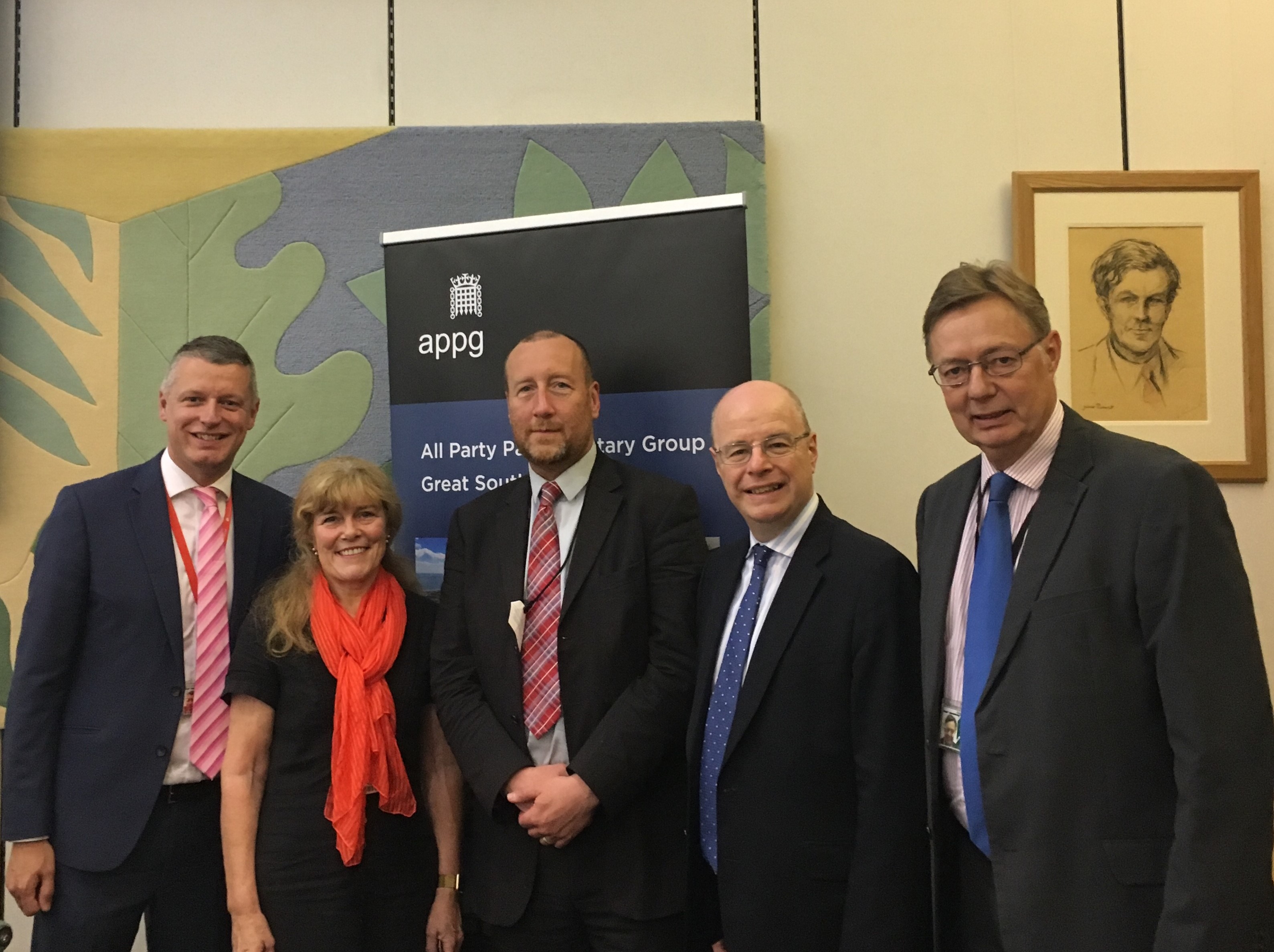 Last week in Parliament, the Great South West grouping of MPs called for an ambitious strategy to improve connectivity for the South West Region as a whole, covering road, rail and broadband.

The inaugural meeting of the Great South West All-Party Parliamentary Group was held in the Houses of Parliament on Tuesday 25 June. MPs and stakeholders heard directly from Network Rail, Great Western Railway, South Western Railway, and the Peninsula Transport Body about their plans for the region.

Among the planned improvements are Network Rail’s ‘Rail Resilience’ programme which includes repairing the sea defences on vulnerable lines, delivering the Dawlish sea wall project, and securing the track between Holcombe and Teignmouth. There are also general improvements planned by train operators such as better Wi-Fi and additional charging points, together with timetable changes for London-Plymouth and London-Exeter trains to stabilise the service and improve journeys for rail passengers.

Members of Parliament present called for an ambitious transport strategy covering road, rail and broadband to ensure that the Great South West can live up to its potential. Work will be ongoing over the next couple of months to produce an overarching vision for the future; highlighting projects which have the capacity to deliver the greatest benefits to the Great South West.

Sir Gary Streeter, Member of Parliament for South West Devon, chaired the meeting and said: “The Great South West has so much potential, but we need to seize the moment and champion transport investment in our region to unlock productivity, economic growth, and improve residents lives. By working together with partners, we can work on the common issues which affect us all in the South West, making the case for investment at the heart of Government.”

David Ralph, Chief Executive of the Heart of the South West LEP said: “It was great to hear from key transport providers, including Network Rail, South West Trains and Great Western Railway about their plans for improvements in our region. As a group, we are committed to press HM Government to fund vital projects such as the Dawlish Rail Line improvements and the A303, but also ensuring we get the very best connectivity across the Great South West.”

Jim Stewart, Chair of Dorset Local Enterprise said:  “Our region has immense potential to grow and expand and we are pleased to be working collaboratively across the Great South West, tackling barriers to productivity, particularly transport infrastructure.  Dorset requires enhanced infrastructure including improved north / south routes and faster trains to London which will really ignite investment and economic growth.”

Mark Duddridge, Chair of the Cornwall & Isles of Scilly LEP said: “It’s vital that there is a long-term investment strategy in place that provides strategic connectivity and resilience for Cornwall and the wider South West. We have already commissioned work to highlight projects and priorities and look forward to working with our MPs on making our investment case to Government.”

The next Great South West APPG meeting will take place in mid-July.

Leaders from organisations across the South West of England (including the public, business and education sectors) have been developing a strategy on increasing productivity and prosperity through collaborative working. Great South West is the working title.

To date, this has been guided by an informal group of leading business leaders and discussed by both LEP and Local Authority Leaders and Chief Executives (as part of SW Councils) with a common interest in increasing prosperity in the region. This work has been led by a small group drawn from the Local Enterprise Partnerships, including businesses, universities and Local Authorities.

Its focus is to work collaboratively across cities, towns and rural communities, developing shared propositions, attracting investment and tackling barriers to productivity; making the whole of the South West a prosperous region. Great South West aims to work on areas of common interest across the South West where our combined efforts can make a real difference.

For media enquiries please contact Helena Davison, Communications Manager for the Heart of the South West LEP at helena.davidson@heartofswlep.co.uk or 07525 806333.