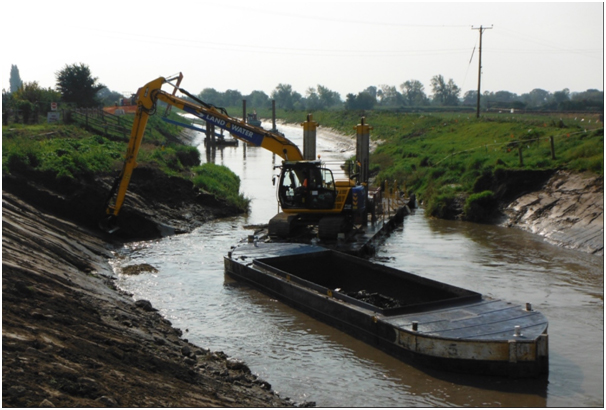 As part of the part-Growth Deal funded Somerset Flood Action Plan, two sections of King’s Sedgemoor Drain will be dredged for Somerset Rivers Authority this autumn, to bring back their 1970s’ flow.

The works at Parchey Bridge near Chedzoy and the railway bridge at Dunball will help to reduce flood risks across an area of about 12.5 square miles.

The scheme’s main aim is to restore the benefits of ‘fluming’ – a process which involved concreting parts of the river bed so that more water could pass as quickly and as smoothly as possible under bridges.
Since this fluming was done in the early 1970s, silt has built up on top. A floating excavator and barge will now be used to move that silt and a digger will spread it over land nearby. The job is being done for Somerset Rivers Authority by the Environment Agency.

Cllr John Osman, Chair of Somerset Rivers Authority (SRA), said: “I’m very pleased to see this work going ahead. It’s part of the SRA’s plan to improve the whole interlinked system of the River Parrett, the River Sowy and King’s Sedgemoor Drain, and it will give extra protection to a large part of the Somerset Levels and Moors.

“It follows on from nearly £5million pounds worth of work already done for the SRA at Beer Wall near Othery, Chedzoy Flap and Dunball – and more’s on the way. There’ll be further improvements at Dunball next year and we’re planning to increase the capacity of key parts of the Sowy and King’s Sedgemoor Drain through work in these rivers’ channels and on their banks. Bit by bit, the SRA and its partners are making a big difference.”

Chair of the Heart of the South West LEP, Steve Hindley CBE DL said: “The LEP’s Growth Deal funding is being used throughout Devon, Somerset, Plymouth and Torbay for a broad range of projects that all contribute towards generating growth in the local economy.

“This scheme is part of the Somerset Levels 20 Year Flood Action Plan that the LEP is supporting with £13.5m from the Growth Deal package. Following the floods of 2014, it’s crucial to improve the resilience of these areas to safeguard homes and commercial premises, to create new jobs and boost business confidence.”

The Sowy is a man-made river conceived as a Parrett Flood Relief Channel after huge floods deluged Somerset in 1960. It was dug out between 1969 and 1972, when works also included the fluming of local bridges.

The Sowy is used by the Environment Agency to take excess water away from the River Parrett near Aller. It goes down via Beer Wall to the KSD near Greylake, then water re-joins the Parrett at Dunball.

Providing more capacity in the Sowy-KSD system, so that it can be used more effectively, is a key aim of Somerset’s 20 Year Flood Action Plan, which is overseen by Somerset Rivers Authority and partly funded by £13.5m from the LEP’s Growth Deal. Works so far have included the creation of new river channels under the A372 at Beer Wall, the installation of a new water control gate near Chedzoy and the removal of obstructive masonry from under Dunball Old Bridge, which carries A38 traffic southbound.